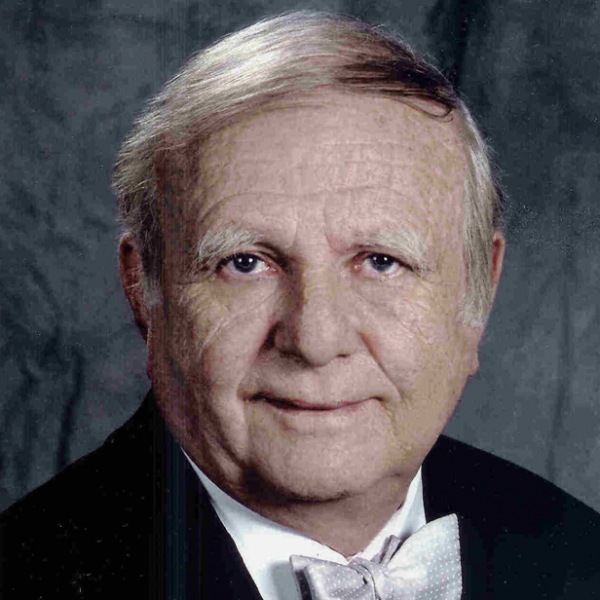 John Cacavas began his musical career when, as a 13-year-old, he formed his own band in Aberdeen, South Dakota. He began college locally at Northern State University, and then went on to study music and composition at Northwestern University in Evanston, Illinois, where he became active as an arranger for several varsity musicals and director of a weekly radio orchestra broadcast.

Upon graduation he entered the Armed Forces and became an arranger with the prestigious United States Army Band in Washington, D.C. It was there that he began writing arrangements and compositions for the nation’s major music publishers. He also began his long-time friendship and collaboration with Charles Osgood, lyricist (now news commentator and personality at CBS). With their writing of an oratorio, The Conversion of Paul, they won national acclaim.

Upon his discharge, Cacavas moved to New York and began pursuing his career in earnest, continuing his composing and arranging. He served as an assistant conductor at CBS under the tutelage of the esteemed Alfredo Antonini, and worked closely with Morton Gould. Cacavas went on to become Director of Publications at Chappell & Co. Inc. while continuing with his composing career.

Cacavas has written extensively for television. Along with his five years of scoring Kojak, and three years with Hawaii Five-O, he has written for such diverse shows as Matlock, Columbo, Quincy, Murder She Wrote, Mrs. Columbo, The Gangster Chronicles, Lady Blue, The Four Seasons, Seven Brides for Seven Brothers, Today’s FBI, The Equalizer and Bionic Woman. His music has also appeared on Friends, Everybody Loves Raymond, Malcolm in the Middle, Magnum P.I., Dawson’s Creek, Perry Mason, Buffy the Vampire Slayer, X-Files, Frasier and countless others.

A sample of his scores for TV movies are Time Machine, Murder by Reason of Insanity, Police Story II, Dirty Dozen II and III, The Return of Ironside, and Hellinger’s Law.

His scores for mini-series include The Executioner’s Song, Jenny’s War, Confessional, A Death in California and Perfect Murder Perfect Town.

Aside from films, Cacavas has been active as a guest-conductor. He has appeared with the London Symphony, the BBC Orchestra of London, The Atlanta Symphony, Radio City Music Hall Orchestra, The Norwegian Broadcasting Orchestra, The Dutch National Radio Orchestra, Sinfonia of London, The City of Prague Philharmonic, The Florida Symphonic Pops and The United States Army Band. He has also served as the principal conductor of the Beverly Hills Pops.

In addition, his works have been performed by many major orchestras including the Philadelphia Orchestra, Boston Pops, San Francisco Symphony, Milwaukee Symphony, The Honolulu and Indianapolis Symphonies and countless others.

His CDs include From London with Love (with the London Symphony Orchestra), Phantom of the Opera and Other Broadway Hits, Gallant Men, Behind the Scenes, which is a selection of his top TV and movie themes, as well as the soundtrack album from Airport 75.

Cacavas has been a leading figure in the American school music field for many years. His published educational works total over two thousand in the areas of symphonic band, orchestra, chorus and chamber works. Many of these are published abroad where they receive extensive performances. In recognition of his musical expertise, he has been invited to guest lecture and conduct seminars around the country, appearing at UCLA, USC, Northwestern University, San Diego State and many other venues.

As a songwriter, his most recent collaboration has been with lyricist Hal David and they have two CDs currently in release by the music production firm, Zomba.

Cacavas is the author of three published books, Orchestration and Music Arranging, The Art of Writing Music and It’s Not All Do-Re-Mi.

Musical honors include two Emmy nominations. He was awarded the Northwestern University’s Distinguished Alumni Award and received an honorary Doctorate in Humane Letters from Northern State University. In collaboration with Charles Osgood, he has won two Freedoms Foundation Awards, for The Golden Door and Gallant Men.

Cacavas is presently a member of the Motion Picture Academy’s Executive Music Committee and has served as a governor of that organization. He has also served as president of the Composers Guild of America. He has been a member of ASCAP’s Board of Review and most recently on the Board of Directors.

Cacavas has published his autobiography, entitled It's More than Do-Re-Mi: My Life in Music. He lives in Beverly Hills, California and London, England with his wife, Bonetta Becker Cacavas and is an accomplished chef. They have three grown children, Lisa, John and Jennifer, and three grandchildren, James Stewart, Eric and Alexander Cacavas.